Since we moved to NW Arkansas from the Twin Cities in Minnesota in 2003, we have traveled Interstate 35W too many times to count. Each time, we comment on many of the same points of interest as we travel the route. I’ve included some of these in my next Deception book (yet to be titled) as the story moves from Minnesota to Joplin, Missouri, into Picher, Oklahoma, and further into Northwest Arkansas. I’m curious as to whether my readers have other remembrances of their travels along that route? Tell me what you think. Here’s just a short bit from the next Deception novel:

The rich, black farmlands of soybeans in southern Minnesota and cornfields in northern Iowa soon morphed into solar farms north of Des Moines. The afternoon sun reflected off the

brilliant white towers of hundreds of solar windmills built on both sides of the highway. Three enormous blades moved in graceful, slow motion arcs atop each of the tall towers erected to stand in rows mirroring a farmer’s crop. No wonder they called them solar farms, Sam thought. The flat Iowa farmland provided a perfect location for the solar farms. ….
Quay slowed as they entered several miles of construction south of Des Moines. “We always say construction is one of the four seasons in Minnesota. Looks like Iowa has that season, too,” commented Quay.
Sam knew Quay was anxious about any slowdowns, especially those due to construction. He was totally focused on getting to their destination as soon as possible. To distract him, she began pointing out interesting billboards and signs along the way.
“I saw a sign for the birthplace of John Wayne in Winterset a while back, and it’s got the covered bridges there, too. They were the setting for the book, ‘The Bridges of Madison County’. It was a movie, too. Did you see the signs? You love John Wayne. And I loved both Bridges book and the movie. Wouldn’t that be an interesting place to visit?”
Quay gave a noncommittal “Uh huh,” as he unwrapped a fresh package of bubble gum.
Undeterred, Sam continued to point out spots for future visits. Suggesting that the Amish community in Lamoni might be another good place to visit, Sam pointed out a black, horse-drawn buggy silhouetted on an overpass, just before the state line as they headed into Missouri.

“When we get to actually enjoy our honeymoon, Quay, maybe we could visit some of these places, what do you think?”
“We will make all those stops part of our honeymoon, Mrs. Thompson, I promise. We can look into them on our way back, after this case is through. First things, first, though, you know.”
“I’m going to hold you to that, Mr. Thompson.” She thought she’d better make notes of these sites for their return trip. 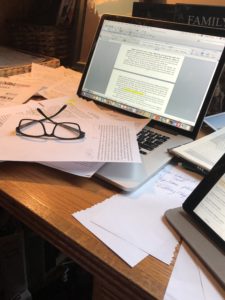