Two seemingly unrelated murders lead Detective Quay Thompson of the Minnesota Bureau of Criminal Apprehension through a series of twisted trails from the Twin Cities of Minneapolis and St. Paul to the Minnesota Boundary Waters of Lake Superior. The trail begins with the discovery of a young girl’s body on the North Shore of Lake Superior. Her murder leads Thompson to a group he believes was also connected to his wife’s unsolved murder the previous year. Quay Thompson and his partner, Samantha Atwood, begin a new investigation of SPARTA, the Strategic Populace Against Research Technology in America, an activist group recognized for their protests of genome research in the Twin Cities. Tenaciously following the complex murder case, Thompson uncovers startling additional SPARTA activities surrounding life-changing and futuristic biotech and genome research at Cameron BioTech labs in the Twin Cities. Deception and Redemption is a tale of international corporate espionage and murder leading to an action-filled, surprising conclusion in Minnesota’s North Woods. 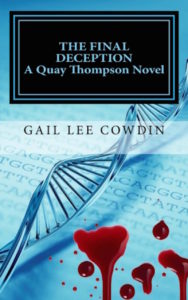 The story continues in The Final Deception, when Sunni Hyun, one of the Cameron lab’s top researchers who had disappeared after the Cameron BioTech murders a few months earlier, becomes the focus of a new investigation. When Hyun calls Quay Thompson asking for protection from North Korean operatives she believes are trying to kill her, he hopes he and the BCA may finally be able to close the case of espionage and his wife’s murder. BCA partners, Quay Thompson and ‘Sam’ Atwood, take Hyun into custody and head to a safe house in Southern Minnesota to begin interrogation. A drone leads the group of killers to their location, and once again, Quay and Sam’s lives are turned upside-down with an attack at the safe house. Quay is injured in a shootout, and Samantha takes over the investigation. A young golden retriever named Chip figures prominently in their investigation and the solution to Sunni’s final deception.

Minnesota Bureau of Criminal Apprehension partners Quay Thompson and Samantha Atwood return as newly married partners in Dark Deceptions, the third of the Quay Thompson series of detective crime thrillers. When Samantha’s sister, Sara Atwood, arrives as a surprise guest for her sister’s wedding on Minnesota’s North Shore of Lake Superior, the tone of the day suddenly transforms from one of joy and excitement to that of shock and fear. As a result of Sara’s pleas, the newlywed BCA couple takes on a new case tracking down what turns out to be a national threat involving a planned copper mine in Northern Minnesota and a conglomerate controlling all copper mines throughout the Midwest. Searching for answers, the couple’s working honeymoon takes them from the Boundary Waters Canoe Area in Minnesota to Joplin, Missouri, and finally into the Ozarks of Arkansas. Quay and Sam follow a highway of corruption, deceit, and terrorism that uncovers ties between the copper mining industry, a drug cartel and a much darker international intrigue with a corporate leader in China. Time becomes of the essence in the race to stop a planned attack in mid-America. Stress relief along the way comes in the form of the antics of their golden retriever Chip, and a new addition to the team, Spunky, a one-eyed kitten. The beauty of the Ozarks provides a perfect backdrop for Quay and Samantha Thompson when they conclude the case and can finally begin their honeymoon. Surprising twists in the case, kidnappings, chases, international intrigue, and a little added romance, make this a suspenseful crime thriller you won’t want to put down.

EACH BOOK STANDS ALONE. The books take the reader on suspense-filled rides through Minnesota’s North Country in Deception and Redemption and in The Final Deception into the southern lakes country. Twists and turns in the fast-paced stories keep the readers in suspense as they follow each investigation.  A new deception begins with Dark Deceptions and the newlywed pair of BCA detectives follow a lead taking them south to Arizona and then into Missouri, Oklahoma, and Arkansas.

Little Dee 7 is a tiny hand bell. She didn’t think she was very important, because after all, she didn’t even have her own special place in the bell case. She lived in an old white sock labeled with her name, D7, and was tucked into a small corner of the case. She wasn’t sure anyone even knew she was there. She wanted to join the rest of her bell family and make beautiful music like they did. Then, one day everything changed, and she learned she was very special, indeed! Little Dee 7 is a charming children’s story about the importance of recognizing self-worth and individuality. Little Dee 7: A Handbell Story brings the inspirational tale of the littlest bell, and the joy she discovers with the music she makes as she becomes the star of her handbell family. 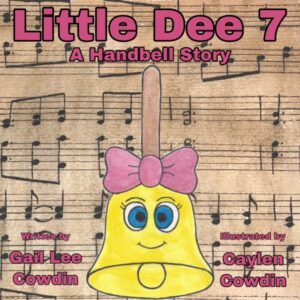 All Gail Lee Cowdin books are available at Amazon.com

5 out of 5 stars! What people are saying about the books.

“5.0 out of 5 stars  When is Book # 2 with Quay Thompson?“March 17, 2017 A. Campi All the elements of a great mystery. Good character development, not predictable, and leaves you wanting more! Keeping us in suspense.

“5.0 out of 5 stars Great read!”  February 3, 2018 Format: Kindle Edition|Verified Purchase I chose the rating because it is a good book. Suspense and intrigue, but not horribly complicated. Kept my attention always and hard to put down. Subject and characters very realistic, and I could put myself in as an observer. Totally enjoyed it. Great job, Gail!

“5.0 out of 5 stars ” by Diane Steffen November 26, 2017  Started reading and could not wait to see what was going to happen next. Suspenseful throughout! Love the character interactions.

“Thumbs Up”
By PCLon March 18, 2015
A good read. Interesting characters, colorful descriptions, Well-paced plot, and just enough twists and turns to keep you guessing to the end.

“Twisted and devious! Fun to read and second-guess.”
By Jean Sanford on January 29, 2015
What a thriller! Right up to the end it was changing your assumptions. I enjoyed it lots.

“Keeps your interest throughtout the book!”
By TRF on January 24, 2015
I loved the book! Gail does a terrific job of developing the main characters. Her descriptions of the areas where they traveled throughout the story were great and made me want to visit that part of MN! Though I felt like her main “bad guy” gave in a little too quickly, she did a good job of building suspense throughout the story and especially at the end. This is the author’s first book and I think she has a terrific future in writing. I look forward to more Quay Thompson mysteries or any other novels she writes.

“Excellent Book”
By Renee Watterson on January 23, 2015
Excellent book. Enjoyed the setting in Minnesota. Having lived there the first half of my life I could envision all the places Gail descriptively wrote about just like I was there again. Gail’s dramatic writing and plot twists kept my interest throughout the entire length of the book.