First lines are always important in writing a novel. This one is no different. I hope I got it right…at least no one’s died…yet. 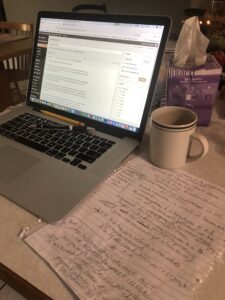 The fireworks had been a dud. Thick fog had moved in and hung low, drifting across the Lake Superior shoreline, muffling sounds, and allowing only brief glimpses of a smeared blur of reds, yellows, and blues. Fireworks in Grand Marais were supposed to have been part of her birthday celebration. A Fourth of July birthday meant you got to see fireworks. Grace gave up waiting for the fog to lift, and wandered away from her family and headed toward the shore to look for agates. She was wearing her birthday gifts, new jeans, a soft blue denim shirt, and a pair of moccasins that she’d eyed at the local trading store in Grand Marais. Her parents must have heard her tell her sister Lexie how much she wished she had a pair of moccasins just like these soft, leather ones with the colorful beads woven over the tops. She loved her gifts! It wouldn’t be long and she’d be able to drive, too. Being fourteen was going to be great!
She had just reached the shoreline when she heard the change in the tone of the men talking with her father. Their voices rose and echoed through the fog with increased anger and what sounded like accusations. She suddenly realized her father had been right. Those men must have followed them. They were in danger. She was in danger!