I’m going to share a piece that I wrote a few years ago. I called it a Fractured Fable. Or by a subtitle, “Roadkill Fables”. Feel free to add your thoughts: 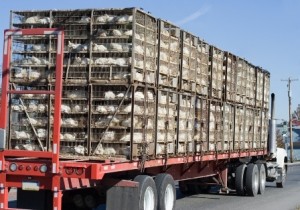 Beatrice was pacing frantically in her cage on the poultry truck. She and several of her sisters were whizzing down the road at over 50 mph which was definitely faster than she’d ever flown, or for that matter, even hoped to fly. White feathers floated in the air inside the truck and occasionally filtered outside and flew like speeding white clouds past her beady watching eyes.
Now, Beatrice was not your ordinary “spring chicken”, because she had correctly guessed what her fate would be if she continued riding on this truck. It definitely had something to do with pain and death! Beatrice just wasn’t into that. The floating and flying feathers gave her an idea. Screeching, pecking, and jabbing at the cage she had been crammed into, she finally managed to make a hole in the wire webbing that she so humbly believed had been named after her – the chicken wire. She fought her way between and past other similar chicken wired crates until she reached the outside walls of the truck.
The determined female then managed to squeeze between the thick wooden side slats of the truck. You could say she ‘flew the coop’, but in this case, as you probably know, she couldn’t exactly call this truck a coop. At any rate, she left in a hurry!
Her sister was another cute chick named Betty. She watched from her crowded cage in the same truck. Her eyes followed Sister Beatrice and observed how she fluttered down from their speeding truck to the black roadway behind. Betty cheered as Beatrice landed and turned victoriously to wave her wing at the retreating truck filled with the other cages chickens.
But Betty’s cheers turned quickly to panicked screeches. Beatrice’s victory shuffle lasted less than a second, because, you see, Beatrice had been a bit too eager. She had failed to look both ways before she lit in the roadway only to be run into and slammed to road by a huge black car following the chicken truck. And as if that wasn’t enough to destroy her dignity, another car speeding behind the black car, wheeled Beatrice’s small body around so that she looked like a 90’s break-dancer spinning on her back. There was a moment’s respite (that means a bit of a break) before an eighteen wheeler finally smashed Beatrice flat on the roadway.
Betty had watched the entire event in horror. The horror of it made her beak curl. She couldn’t bear what had happened to her sister, and as a good sister she knew she needed to be with her sister. Betty, being a naïve chick, thought there might be a chance that Beatrice may still be alive. So she, too, fought bravely to be free of the cage and the speeding poultry truck. But alas, as Betty broke through the slats on the side wall of the truck, she met the same fate as her sister Beatrice. Betty had flown from the poultry truck with wings flapping wildly as she met the grill of a faded red pickup. Poor Betty was followed quickly by several other hens who had believed Beatrice and Betty were martyrs who had died for them in their struggle for freedom. Barbara, Bernice and Beverly met similar fates. Five brave chickens struggled for freedom only to become roadkill hash. They were truly “dumb clucks!” The moral of the story my friends, is simple… But maybe you can choose your moral to the story- -there are many:
“Freedom usually comes with a price.” Or “Always plan your next move carefully!” Or “Look before you leap!” Or “There are many ways to be remembered.”
Add yours, if you wish.